Mumbai: Today is the birthday of Bollywood actor Sanjay Dutt, 29 July as he turns 63 years old. In such a situation, today is a very special day for him and for his life. As such, on the birthday of Sanjay Dutt, ‘from Bollywood stars to his fans’, are congratulating him through social media. But his wife Manyata Dutt has made his birthday even more special by writing a special note for him. Manyata’s post is going viral on social media.

Sanjay Dutt’s wife Manyata Dutt has shared a very beautiful photo of her husband Sanjay Dutt, congratulating him on his birthday. In the photo, Sanjay Dutt can be seen in the gym holding dumbbells in his hands and flaunting his biceps. While sharing this photo, Manyata wrote- “Happy Birthday my Rockstar. Always do amazing things like this and keep inspiring everyone like this.

On this special post of Manyata, Sanjay Dutt’s fans and Bollywood stars are congratulating him by commenting. Along with this, everyone is expressing love to Manyata about the chemistry of both of them on the post.

Sanjay Dutt was recently seen in the film Shamshera, in which he played the role of Shuddh Singh, a ruthless cop. Seeing Sanjay’s villain avatar in the film, everyone became his acting fan. However, the film was beaten at the box office. Sanjay Dutt shared a note on his Instagram on the previous day, July 28, after the film was a flop at the box office. In which he wrote, “This is a film made of blood, sweat and tears. It is a dream that we have brought on screen. Movies are made to entertain the audience and every film finds its audience. Shamshera found that many people hated it. The haters didn’t even see it. I find it terrible that people don’t respect the hard work that we all do.”

Before the film Shamshera, Sanjay Dutt was seen in South’s superhit film ‘KGF: Chapter 2’. The film proved to be a super duper hit at the box office. Now talking about Sanjay Dutt’s upcoming film, he will next be seen in the romantic-comedy film, ‘Ghuchadi’ alongside Raveena Tandon, Khushali Kumar, Parth Samthaan and Aruna Irani. 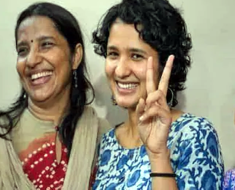