Home
Breaking News
Cannes 2022 Highlights: From India being honored as the Country of Honor to Deepika Padukone becoming a jury member

Entertainment Desk: This year’s Cannes Film Festival is special for India and there are many reasons for this. The first and foremost reason is that this time the jury member of Cannes 2022 is Deepika Padukone. When Deepika along with the rest of the jury members came to the opening ceremony of 75 Cannes Film Festival, the whole of India was proud of her. Apart from this, many Bollywood and TV celebs have also become a part of this festival this time. Nawazuddin Siddiqui, Tamannaah Bhatia, Urvashi Rautela graced the red carpet. Tamannaah and Urvashi won hearts with their fashion statements and outfits.

Apart from this, this time India has been chosen as the first country of honor and on the opening day, Information and Broadcasting Minister Anurag Thakur along with AR Rahman, Pooja Hegde, Shekhar Kapur and others were present.

PM Modi says that India has been declared as a country of honor and he is very proud of it. He says that as India is celebrating the 75th Independence Year, the Cannes Film Festival is also celebrating its 75th anniversary. Along with this 75 years of Indo-French diplomatic relations also makes it more special.

Urvashi Rautela has shared her photo from the red carpet in which she is seen in a big white gown. Sharing her photo, Urvashi wrote, Dream debut. Thanks Universe. On the other hand, Tamannaah Bhatia is also making her Cannes debut and she looked very glamorous.

Nawazuddin has shared photos with Anurag Thakur, Shekhar Kapoor and Prasoon Joshi. He wrote, From representing films from India to representing India.

AR Rahman who has been to Cannes is very excited as it will also be the premiere of his directorial debut film Le Musk.

Lok Gayat Mame Khan also had a Cannes debut and arrived at the film festival in a very stylish look. However, Indian culture was clearly visible in her outfit. 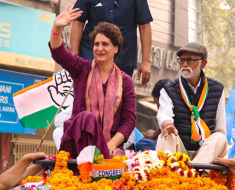